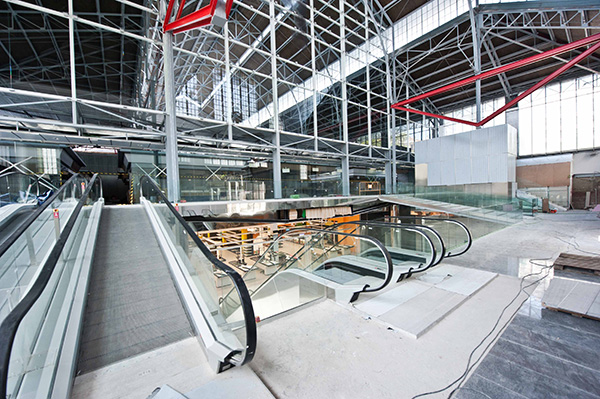 Built in 1892, the Ninot Market is strategically located in the Barcelona "Ensanche". From the very beginning this market aws an important element of the distribution network of the city and has always been an architectural reference for the neighbourhood. The renovation project by architect Josep Lluís Mateo has focused on maintaining and reinforcing the existing structure and in modernizing the facilities and market stalls, improving access and logistics. Also, a lot of effort went into trying to maintain the always difficult balance betweent the old and new. Renovation works have lasted 5 years (3 phases) and cost 30 million euros. The 16,000m2 project also included two urban plazas located just outside the market. The new Ninot has parking spaces for more than 100 vehicles, has a special facility for waste management and recycling, and a restaurant.

Once the provisional market was in place, work was begun in the remodelling of the old market, which at first was supposed to have been completed in 26 months but due to the financial crisis and political situation, had to be carried out in three phases. First came demolitions and earthmoving, then came the diaphragm walls in the inside perimeter of the market and the micropile walls, the underpinning of the central columns with micropiles to support the columns during the digout of basement floors. Then, an electrical substation had to be installed.

Once specific financing was allocated for the refurbishing of the market in 2011 by the City Council, a construction project was drawn up, taking into consideration what had already been completed in the previous phase, in 2010, including everything that could be realistically carried out during 2011, within the pre-established time limits, deadlines and costs, and without affecting the subsequent phases.

During this second phase of the Ninot Market, important work was carried out below ground level which would give the market a whole series of new and modern facilities. The objective of this second phase was constructing the structure below ground level that would sustain the new market above. This had to be accomplished without removing the roof, the external walls or the structure of the building.

Three underground levels were excavated to the new foundation level. This meant reinforcing all the structural elements, underpinning bases with metal braces, bracing groups of micropiles, etc. Repair, restoration and reinforcement of many of the columns was needed, as well as bracing. Also for perimeter walls were needed, with shotconcrete over reinforcement mesh. Columns were also built to connect with new levels.

During the third and last phase, structure and concrete work were continued below ground level. Once the screed was in place and the asbestos removed from the roof, the whole metallic structure was fireproofed.

Work began in installing the new sheathing of the façade and the metal structure for the market stalls. At the same time civil works and installations were being executed. Work was completed on the new distribution hall, which connects the market, the supermarket, the logistics area and the city.

Two years after beginning the works, Barcelona can now boast a new state-of-the-art market, technologically advanced and which has managed to combine avant-guard design with the restoration of historically relevant structure, while at the same time adding several underground levels for better logistics, a new supermarket and parking area.